NIGERIA POLICE. When will it change and arrest it's scammers... WILL IT EVER?

IT IS A SAD FACT THAT MANY OF THE SCAMMERS COME FROM NIGERIA.

They have plenty of excuses... the economy.. they can't get money any other way so they have to scam.

It will never to right to steal someone's identity, pretend to be the person in the picture and gain someone's trust before robbing them. Sometimes of vast amounts of money. 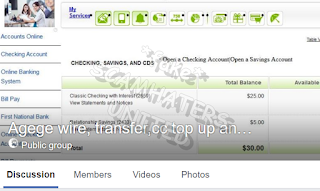 OPENLY OPERATING ON FACEBOOK ADVERTISING THEIR FRAUD. I don't believe these people are hard to catch.. IF YOU WANT TO... Nigeria Police simply do not want to.

NO.. SCAMMING IS WRONG AND IT SHOULD BE A CRIME THAT IS ENFORCED BY IT'S POLICE.

IT ISN'T... THESE ARE THE PEOPLE WHO PROMISE TO CHANGE NIGERIA.... yet don't arrest it's scammers.

There are groups and scammer operating openly on Facebook which would be so easy to catch.
Yet Nigeria Police Force DOES VERY LITTLE. Until this organisation changes... SCAMMING WON'T CHANGE.