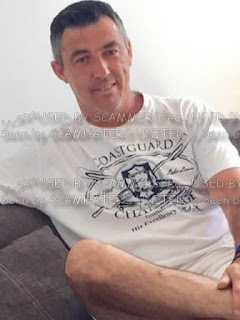 💔 NEVER ACCEPT A FRIEND OR FOLLOW REQUEST FROM A STRANGER
NEVER EVER GO TO A CHAT APP..AVOID HANGOUTS AND WHATSAPP
~
👎NEVER SEND ANYTHING TO ANYONE YOU HAVE NEVER MET IN PERSON. NEVER SEND ANYTHING TO ANYONE WHO CLAIMS MILITARY, OIL RIG OR CONTRACTOR OVERSEAS. IT WILL ALWAYS BE A SCAM
~
👿You are not talking to the person here.. you are talking to a criminal on a laptop
~
👍ALWAYS DO A REVERSE IMAGE SEARCH. THERE IS GOOGLE, TINEYE AND ON A COMPUTER, YANDEX IS BEST. .There are free APPS for phones.
+1 206 855 5722
+1 865 308 8148

I have been scammed!!!

I met an " Orthopaedic surgeon “ ( E7 Dr. James Grey ) on a online WWF WORD game who invited me to play and he played very well. In other words, he can spell. I normally mute my games as I get at least 3-5 scammers request on a weekly basis & I’ve been playing there for the last 10 years with my friends. I forgot to mute him. I was very thorough to ensure he was who he said he is and checked his profile, apparently he had played for 2 years and won 15 badges so I thought he was legit.

He then asked me to go on whatapps after a week.
He was very convincing as a God fearing man & used my faith in God to get to me. I asked for evidence that he is a surgeon and he sent me his medical license. It’s only after 5 months that I realised after getting one of my IT website designer friend to have a second look that it was a fake certificate and you have to really scrutinised to pick the flaws in the certificate. He said that he wanted to come to Australia to visit me in the hope of getting married after a short time of interaction.He said he waited 9 years for God to tell him I was the one specially chosen for him.

The irony of this is I managed to dodge many scammers over the last 10 years , I’m very cynical & I analyse documents for a living as an auditor. But he was very experienced in his deception as he passed all my tests where others have failed. He can describe a hip replacement, ( as I’m medically trained ) he can recite verses from the bible and he uses God’s name all the time.

He said his account was dormant, will reimburse me once his account had been reactivated by Noris Bank 2019 which had been dormant since he had been on active duty in Kabul, Afghanistan ( 24 months passed, hence dormant account )
I have asked for his online banking ID and Password for Noris Bank to ensure it is legitimate before I agreed to loan him the money for the 2 items. Also wrote to an email address to the Bank to ensure that it is a real bank.

I yesterday discovered that the Bank website is a phishing website.I was asked to pay another USD$22,250 to activate his account which I refused which was the final step required before his flight can be confirmed.

He submitted a DA 31 Form without discussion to apply for leave and suddenly I am his fiancee and Benefactor / Beneficiary who need apply on his behalf for the whole process for his leave. He did not disclose that money will be involved as I made it very clear from the 1st week of our rapport that I do not discuss $$$ in any shape or form & discussion is off limits .

This is not a 1 man show, it’s a whole team which I found out too late. 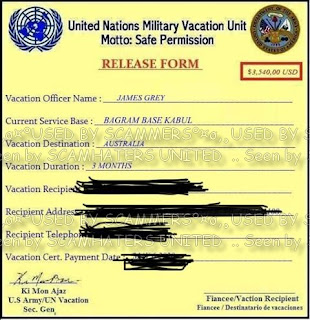 1st step - fiancee request for leave
2nd step - once you signed off , they got your personal details
3rd step- ask for processing fee
4th step- after processing fee, then flight ticket

They will list down $$$ from economy to private jet
You thought you are done , but then last step is they cannot transfer his bonus & allowance unless a fee payment is made to the bank to have his account reactivated.
The Army holiday vacation ( which I later found out that when he forwarded me the email , he can actually amend the sender’s email address to @mail.mil so it looks legitimate & from the army asking him to instruct me to contact the medical service department to process his leave.

I was then asked to pay the following:
Process fee for a dr. replacement
(USD$3504)
Flight ticket to Australia for his deployment :(USD$3408)

I did so much research and also confronted him about the doctored army photos, fake certificates ( birth certificate, wife’s death certificate, passport) he still insist they are real despite the evidence & felt very hurt that I did not trust him as he gave me every proof I asked for. He said he was not aware there are costs involved as it’s his first overseas deployment.
I thank God I did not lend him the $USD 22,250 and I’ ve blocked him . 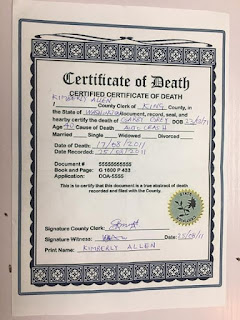 I know some may say why I’m so foolish, naive and gullible
You could not be more wrong ! I’m the last person you could ever scammed or get money out off online as many had tried & I’ve dodged the bullet. I scrutinised everything, & I mean every detail, leave no stones unturned, drove him nuts , made it very hard for him. My mistake was I did not share with anyone from the day money was involved and asked for a 2nd opinion as I thought that no one would believe I “ fell in love” online with a virtual person that I never seen physically, touch or feel & would think I’m daft or crazy. So I kept quiet . It was only when he wanted to come over to Australia & get married that I involved my Pastor that everything unravelled . He was so “genuine “in his plans that he was happy to be grilled by my Pastor on whatapps & answered all her questions. I thought no scammer would go that far. They would have run. He even completed the Intend to marriage application for my Pastor . It was his suggestion as he did not want to wait as his leave was only for 3 months. The red flags were when my Pastor did a search on Twitter, there is a real Dr. James Grey ( orthopaedic surgeon working for the US army medical service but different picture) , there is his birth certificate which has no document no. I noticed his wife’s death certificate was dodgy as the county clerk & witness is the same person .

It’s because of these red flags that my Pastor told me she is concerned.

I’ve submitted some fake documents for your reference so that you can be alerted .

Finally, when a scammer is consistent with his behaviour, affections, constantly reaffirming that he never tell lies, too old for games , his love is real and pulled at your heart strings by saying God in whom he trust , He is the author & finisher of his life , that God always keep His promises, it blindsided me. He said he is the real Dr. Grey in Kabul, can explained a medical procedure, you start to give him the benefit of doubt as he keep saying he will never use God’s name lightly. He never asked me for money but got the cohorts who already has a system set up to do it is what got me.
I’ve done my due diligence, before I loaned him the money , I wrote to the medical board to check for his registration, I wrote to the army , I wrote to the UN and asked if all these processes were legitimate as they ( scammer medical service Dept ) said Donald Trump had cut expenses to the UN ( a fact ) but sadly no one replied my emails for validation. I sent him all the Q& As from Quora website about scams, UN scam alerts & he was always reassuring me.
I hope by sharing my story, someone can be alerted in case it’s the same fake pictures used.
God bless you all 🙏🏻
~~~~~~~~~~~~~~~~~~~~~~~
💔 NEVER ACCEPT A FRIEND OR FOLLOW REQUEST FROM A STRANGER
NEVER EVER GO TO A CHAT APP..AVOID HANGOUTS AND WHATSAPP
~
👎NEVER SEND ANYTHING TO ANYONE YOU HAVE NEVER MET IN PERSON. NEVER SEND ANYTHING TO ANYONE WHO CLAIMS MILITARY, OIL RIG OR CONTRACTOR OVERSEAS. IT WILL ALWAYS BE A SCAM
~
👿You are not talking to the person here.. you are talking to a criminal on a laptop
~
👍ALWAYS DO A REVERSE IMAGE SEARCH. THERE IS GOOGLE, TINEYE AND ON A COMPUTER, YANDEX IS BEST. .There are free APPS for phones. 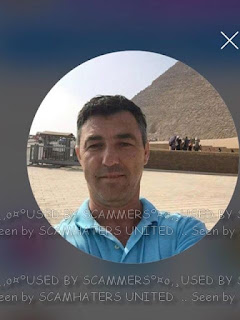 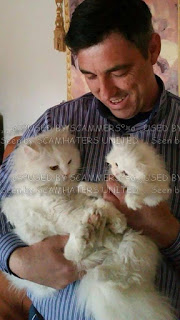 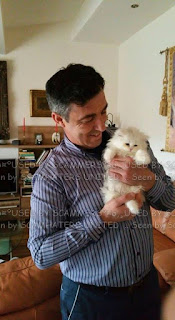 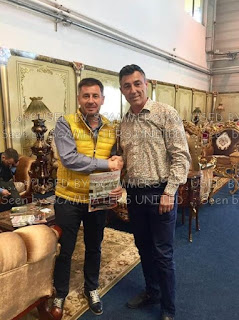 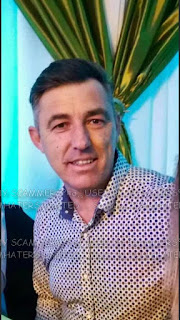 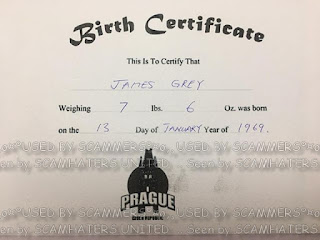 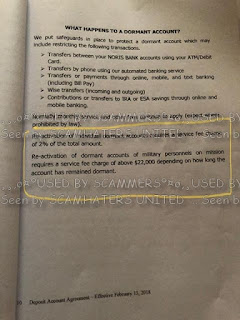 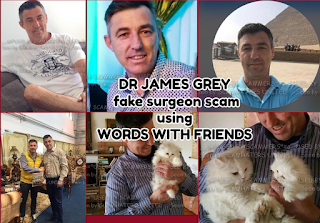 Email ThisBlogThis!Share to TwitterShare to FacebookShare to Pinterest
Labels: grey