DAVID BENJAMIN... THESE EVIL SCAMMERS HAVE TO BE STOPPED... HELP IDENTIFY THIS PICTURE , IT'S NOT US ARMY

DAVID BENJAMIN... THESE EVIL SCAMMERS HAVE TO BE STOPPED... HELP IDENTIFY THIS PICTURE , IT'S NOT US ARMY 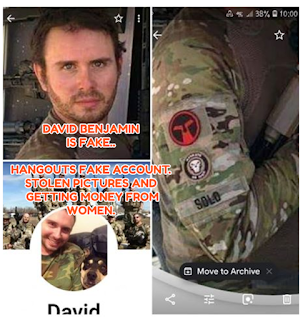 Was on Facebook but his account was 'hacked' 😂and so he went to
....🚩 Hangouts.
THE SCAMMERS USING THIS HAVE VICTIMS.
They are collecting a lot of money by repeatedly saying that they are coming home from Afghanistan.. every woman they speak to they are engaged to and they want paying all the time.
🚩💲 Once a soldier is deployed he only comes home when the US Army pays for it.
🚩💲There is no such thing as a Fiancee Form or a Fiancee asking for leave.
🚩💲There is no Replacement Soldier fee... they go as a unit they fight as a unit, they are sent and brought home by Miliary transport .. NOT TO AN AIRPORT NEAR YOU !
~~~~~~~~~~
☠️ANYONE TALKING TO THESE PICTURES IS BEING SCAMMED.
THE JACKET IS NOT ISSUED UNIFORM AND THE MAN CAN'T BE A SOLDIER WITH THAT HAIR.. THERE IS NO US FLAG ON THE ARM OF THE UNIFORM
LOOKS MORE LIKE SOME MOVIE AND ACTORS.
~~~~~~~~~~~~
💔 NEVER ACCEPT A FRIEND/FOLLOW REQUEST FROM A STRANGER.
👎NEVER EVER SEND *ANYTHING* TO ANYONE YOU HAVE NEVER MET IN PERSON. IT IS ALWAYS A SCAM
👿YOU ARE NOT SPEAKING TO THE PERSON HERE.JUST TO A CRIMINAL ON A LAPTOP
👍ALWAYS GOOGLE IMAGES. Or you can use TINEYE. There are other free apps you can get for mobiles..TRY REVERSEE! if on computer use YANDEX.