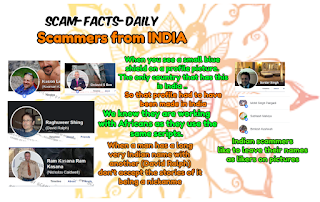 We know they are working
with Africans as they use the same scripts.

OFTEN THERE IS A VERY INDIAN NAME WITH A WESTERN NAME For example RAM KASANA RAM KASANA (Nicholas Caldwell).. DON'T ACCEPT THIS IS A NICKNAME HE GOT IN INDIA.. or a name his mother gave him !

IN INDIA FACEBOOK HAS BEEN DOING TRIALS OF A PRIVACY SCHEME.. Where you see the small bue shield on the profile picture or it says 'THIS PROFILE IS LOCKED AND CAN ONLY BE SEEN BY FRIENDS'.. it HAS to have only been made in INDIA.

Indians like to LIKE the pictures.. check the LIKERS on pictures and if it is a Doctor in Syria or an American on an Oil Rig and has long lists of only INDIAN MEN LIKERS .. that is telling you something.