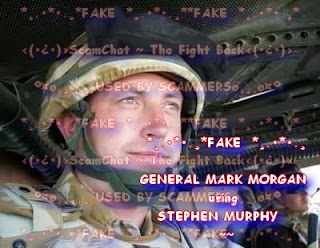 MARK BUSH
https://www.facebook.com/mark.bush.790693
THIS IS A LARGE SCAM USING THE STOLEN IMAGES OF STEPHEN MURPHY. Who is English and has never been int eh US Army.
~~~~
He will say he is your 'BOYFRIEND'... and he loves you and wants to marry you.
** NO US SOLDIER CAN JUST MARRY A WOMAN WHO IS NOT AN AMERICAN CITIZEN**
~~~ 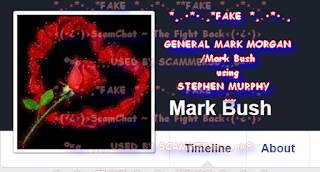 He says that he is in SYRIA...

HE SAYS HE NEEDS MONEY TO UNLOCK HIS FUNDS AND HE WILL HAVE YOU PUT MONEY INTO
UBA BANK..
African Bank
~~~
ALWAYS CHECK AND DO NOT BELIEVE.
NO REAL SOLDIER NEEDS A WOMAN TO SEND HIM ANY MONEY.

THEY ARE STEALING YOUR MONEY FROM YOU.

HE CAN'T BRING YOU TO THE USA. IT IS NOT THAT EASY.

ANYTHING USING THE PICTURES OF STEPHEN MURPHY IS FAKE. NEVER SPEAK TO THEM AND NEVER SEND MONEY

USES Afogenneta Godfrey... NIGERIA TO RECEIVE THE SCAM MONEY THEY ARE STEALING FROM YOU.
I believe I was scammed by him yesterday. He said he had dual citizenship when I questioned his cell #.I live in Canada. He said his father was American and his mother was Canadian but they both passed away when he was very young. His wife is also deceased as well as the uncle that brought him to Canada to live with him. Encouraging him into military life..he had the whole story spelled out..quite eloquently. I had joined an online dating site and he searched me out. I noticed he did not live in my area ... 10 hours or so away. He wanted me to take a chance on him. I’m not into long distance relationships but decided to continue to text. He had a good answer for every concern I had. He love bombed me all day and well into the wee hours of this morning. Telling me everything I wanted to hear. I was skeptical and was on guard but trusting as well. Once he had me, he convinced me to delete my online dating account so we could concentrateb on each other. So I did. He took everything off my profile to try to hook me.Before we stopped texting last night he asked for my email address..which I gave him. Afterwards it was was my first red flag. Gladly my gut instincts started to kick in as I’ve been with narcissistic men previously.. little did he know I knew the signs to watch for. After listening to my mediation this morning I felt the great urge to google him. After a little bit of researching...not that much really, I found this site. Yup well...Mark Morgan or whoever you are, you can go fly your kite somewhere else.This woman was born at night but not last night. You might not think so, you may even think I’m desperate, but I’m much smarter than you. He did try to contact me via text and email this morning but I didn’t answer back. I have t heard from him since. I have now blocked his # which he is using: 805-530-8571 and email address: markmorgan@gmail.com. He didn’t get the chance to ask for money...I would NEVER fall for that either. That would have DEFINATELY been my second red flag. Catch his ass. He preys on good trusting women with big open hearts.
at June 09, 2017