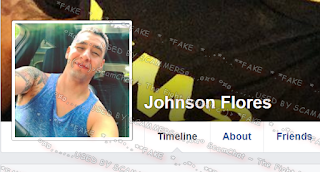 HE IS Mike Flores
@mikeflores7500 ON TWITTER.. BUT THAT IS FAKE TOO. 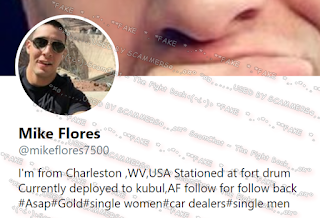 
HONEY.. CAN YOU SEND AN ITUNES CARD, WANT TO DOWNLOAD SOME MOVIES HERE !!!! .... no.. iTunes cards are Scammers Currency. They are used in fraud so are worth many more times than the face value.

NEVER SEND ITUNES, GIFT CARDS OR MONEY TO ANYONE YOU HAVE NEVER MET ONLINE.
~~~~~~~~

HE IS A SOLDIER.. DON' T YOU THINK HE HAS NO ARMY FRIENDS, NO FAMILY.. NOTHING PERSONAL, NOTHING SHARED.
IT'S WRONG BECAUSE.... YOU ARE BEING SCAMMED. 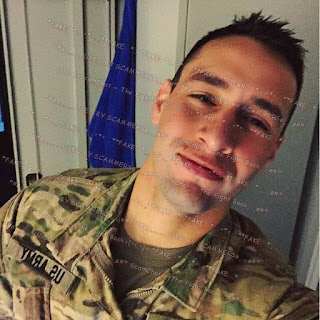 *NO**.. you are not talking to the real one and his pictures are stolen and used by someone else. You are talking to a scammer. You are being scammed. It is **NOT** the man in the pictures. It's a scammer on a laptop. 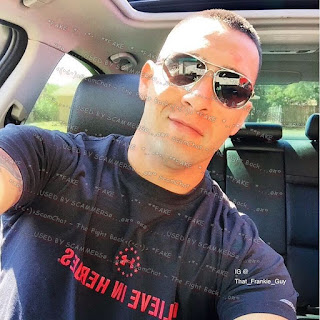 11 June 2020 at 18:58
Here the same by the name of Scott Flores aka Depalo 38 years old. Was sweet and wanted a talk because he had 5 lonely years and just was focused on his work. Told me he lost both of his parents and divorced 5 years ago after he found out his wife cheated. I got suspicious because he always erased his name on the pics in his uniform when I told him I knew his number I saw it was Flores not Depalo and started searching on that name and came on your site. When I confronted him with ot he said he is real and i demanded a video call and he said he couldn't speak I said no he had to talk and when he called it was just and image of a training Flores and a lot of noise in the back. I blocked him immediately. He asked some card for his wifi nothing else. I feel deep for the real Flores because alot of his pics aren't really pics you would put on an instagram account or others or really private like just a part of him with a glass of wine so you really think it is real. I hope it all get sorted put because the real person has a really honest smile and looks very nice. Nobody deserve this.
This is the number I got: 610-9841328
Charles Flores Williams on Tinder, he is working with someone in the US called James McMillin. Phone numbers used 720-673-9636, 317-954-8712, 317-518-8538.

18 October 2018 at 12:33
His name is changed Raymond Cupper in skout. And he ask me to pay his ticket to come to my country. Haha...funny. The scammer is that like that poor? Juz scam USD780, is enough to support thier life? Kidding me so much!
ReplyDelete