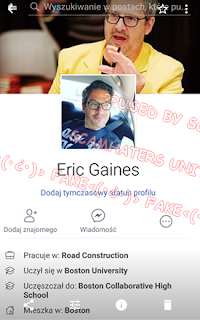 THIS SCAM IS INTERNATIONAL WITH MONEY GOING THROUGH TURKEY, CAMBODIA AND CYPRUS. 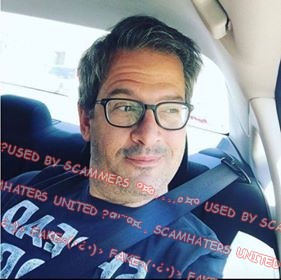 The Airline Ticket is... something easily knocked up on a computer and means nothing. It's like no airline ticket you have ever seen.. because it's fake. 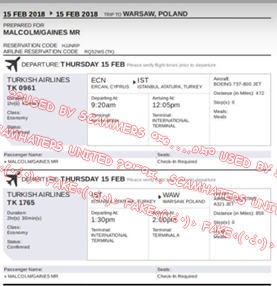 ERIC is on his way to you and is arrested carrying $680,000 and you have to pay tens of thousands to get him out of this as he has been 'arrest' and won't be let go until it's paid as they say he is money laundering !! It's only $61,000 !! The wording of the document is... well! Unbelievable as it is all made up by scammers ! 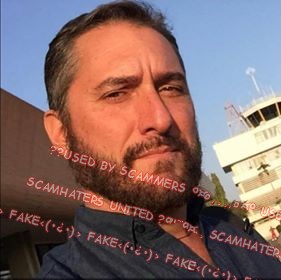 THEN THERE ARE THE TAXED ON THE MONEY HE IS CARRYING.

(The fact that this all does not exist can be checked very easily.... and how does anyone carry $680k on a plane to anywhere?? A scammer has never been through an airport he has no idea.. BUT ALL HE SAYS CAN BE VERY EASILY CHECKED AND FOUND AS RIDICULOUS). The US Embassy would be involved and any victim can check the validity of a story with them. 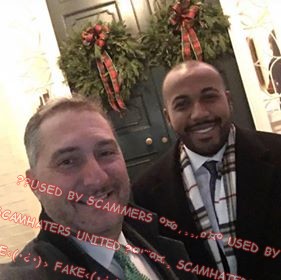 YOU EVEN GET A FAKE PASSPORT FOR ERIC ! (Place of Birth on a passport is city and country also this one clearly has a picture stuck in as the picture isn't integrated into the design as a real passport is). 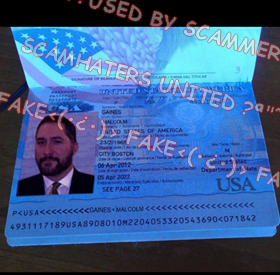 After money has gone for Eric...Malcolm steps in to help.
USING THE STOLEN IDENTITY OF JOEL COMM...a man very famous and plenty of video to show you. THEY WILL VIDEO CALL..of course not a proper video call, they show you the video and there are reasons you can't 'chat' ... but you see the man moving so women believe because they want to. ~~
THIS SCAMMER GANG IS NOT CLEVER AS IT SENDS 'DOCUMENTS'... The TURKEY TAX BOARD...now before you send an official document, make sure the department exists !! This one doesn't. 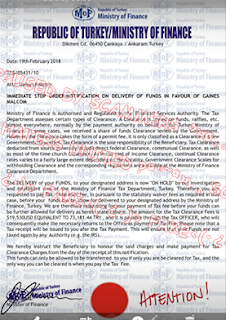 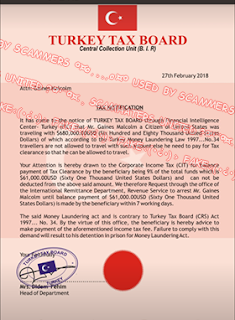 In this case the Eric pictures are used on dating sites and we don't have a name but JOEL COMM !! Just seeing those pictures tells you it's all fake.
Just because the scammer calls you 'my dear' does not mean he is real... IT IS MORE LIKELY TO BE FAKE !
~~~~~
👿YOU ARE NOT SPEAKING TO THE PERSON HERE.JUST TO A CRIMINAL ON A LAPTOP
✋NEVER SEND ANYTHING TO ANYONE YOU HAVE NOT MET IN PERSON.. IT WILL ALWAYS BE A SCAM.
👍ALWAYS GOOGLE IMAGES. Or you can use TINEYE. There are other free apps you can get for mobiles..TRY REVERSEE!
https://www.facebook.com/SHUisteamwork/posts/743703532667253
at February 07, 2019