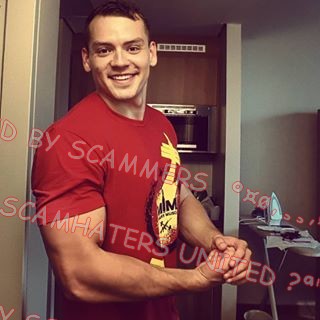 DOES HE REALLY LOOK LIKE A DONALD ! Now comments are open on this one and I have already been told that this scammer does not like anyone commenting and warning on his profile... SO YOU KNOW WHAT TO DO !!
Get upsetting a scammer ladies !!
~~
REPORT AND WARN PLEASE

17 December 2018 at 00:48
There is also a guy on Instagram using his pictures with the name Mack T. Sosa with the account @macktsosa. He will send you a (very fake) CAC if you question his service. And he doesn't know anything about the military because he claims rank and an MOS totally unrelated to the real Sosa's decoration in his photos.

I knew right away he was fake because his English is terrible...he eventually admitted to being originally from India but maintained the rest of his story. Any questions about his rank, service, etc he will dodge. When talking to me he claimed to have joined the US Army at the age of 40...which isn't even possible. He won't give a .mil email address and he will say that he can't tell you things about him and his service because it's "too dangerous." He also told me he was at "military train camp for next mission" in Colorado. When I asked how the weather was he said it was "very hurt"...when I asked if he meant "very hot" he said yes and that he had problems with his phone and asked me to start chatting with him on WhatsApp instead. So it was "very hot" in Colorado that day...a December day that was a balmy 36F. Sweltering!
at December 15, 2018

Email ThisBlogThis!Share to TwitterShare to FacebookShare to Pinterest
Labels: sosa