FAKE BRITISH NANNIES JOBS.
BRITISH NANNIES &CO INC UK
~~~~~~~~~~~~
They give this fake website.
https://britishnannycouk.wixsite.com/agency
(THIS IS A FREE TO MAKE WEBSITE AND NOTHING PROFESSIONAL)
+447031974638
Email address : Britishnanny.co.uk@gmail.com
~~
Here we have the Great Britain Travel Agency again which in the past has had money sent to Turkey for other fake jobs. 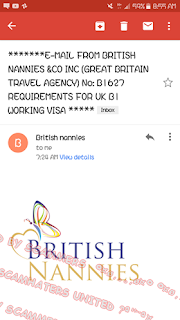 ~~
THERE IS NO SUCH COMPANY AS GREAT BRITAIN TRAVEL AGENCY. 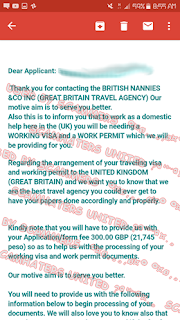 THE LIST OF INFORMATION THEY ASK FOR IS RIDICULOUS...All that they need for identity theft. ALSO COPIES OF I.D. 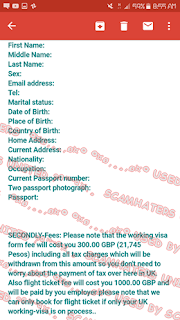 The English is not English as written by someone with English as their first language then the will ask for £1000 Flight cost...
(A FLIGHT FROM THE PHILIPPINES TO THE UK IS NOT £1000). ~~
From the Philippines you have POEA Job Agency Hiring they are the people to go to if you do not want to be scammed. 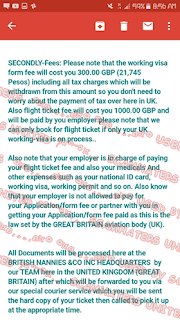 IT IS NOT THIS EASY TO JUST GET A NANNY JOB IN THE UK.. There are rules.. and being a Nanny would not get you a Visa. ~~~~~~~~~~~
THESE ALSO MENTION 'PHILIPPINE EMBASSY IN LONDON'... It's the PHILLIPINES.. which suggests Nigerian involvement.. they make everything 'single' without the S as they do with United State.
~~
ASSOCIATED WITH THIS FAKE JOB OFFER
https://scamhatersutd.blogspot.com/2018/09/orlando-jofrey-tim-fake-jobs-scam.html 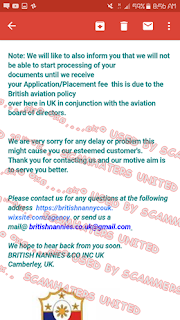 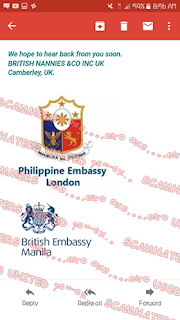