There is so much wrong with this cheque..
Says a Cambodian bank has paid £2.5million.
Not in it's own currency.. in $'s !
Steve.. Mason.. would not be paid in a name that was not his own..Stephen.
IT'S JUST ALL WRONG AND CONTRACTS ARE MORE REGULATED THAN PAYING ONE MAN MILLIONS...
NEVER FALL FOR THESE... 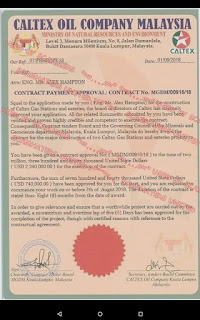 YET ANOTHER FAKE CONTRACT WITH THAT 'BIG RED SEAL OF TRUTH !!! '.. These are sent just to make you think your online lover is getting a lot of money.NO.. JUST THAT YOU ARE GOING TO LOSE A LOT OF MONEY...This rich man will suddenly need YOUR money.. NEVER SEND. ALEX HAMPTON 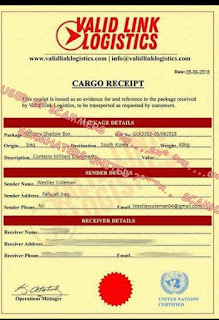 NO MATTER WHO YOU ARE OR WHERE YOU LIVE THEY WILL TRY TO FAKE PACKAGE SCAM...
NEVER PAY MONEY OR GIVE YOUR DETAILS WHEN SOMEONE IS GOING TO SEND YOU A PACKAGE OR BOX.
WESTELY COLEMAN 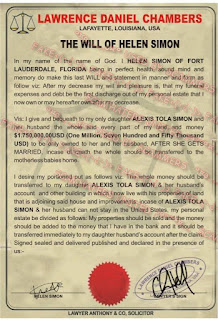 THIS IS SENT TO A MAN TO CONVINCE HIM THAT ON BECOMING THE HUSBAND OF ALEXIS TOLA SIMON HE WILL GET MILLIONS. !!
in our society.. there would not be a 'daughter's husband's account'.We are equal to our husbands.. going to the husband is a very African concept where women are still lower class and have no rights. 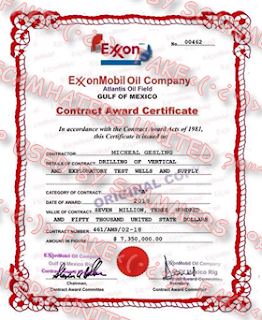 ExxonMobil !!! So many scammers say that !!
MICHEAL GESLING HAS BEEN GIVEN A $7 MILLION CONTRACT... it would NEVER HAPPEN....
These numbers get bigger and bigger!
Don't forget the fake 'big red seal of truth' at the bottom to make it look real..
It looks like it's been made at school! 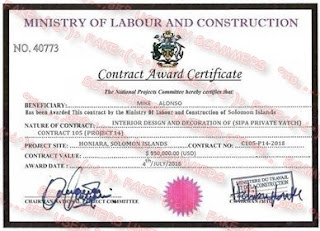 Yet another fake contract that scammers are sending.. now why would a contraxt bhe so flat and smooth... YES BECAUSE IT HAS BEEN MADE ONLINE AND IT IS NOT A PIECE OF PAPER.
MIKE ALONSO 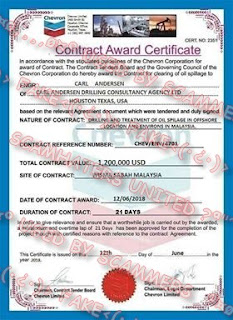 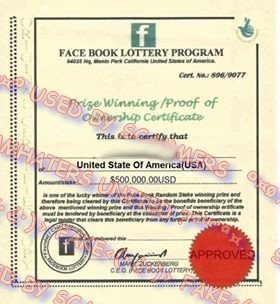 MADISON HUDSON IS TELLING YOU THAT YOU HAVE WON $500,000.... PAY A FEE AND
**LOOK** UNITED STATE... now who says that and gets it wrong... NIGERIA
FAKE FACEBOOK LOTTERY

If they rush to send you anything to prove they are real.. they are fake.


We don't send our passports to strangers and we don't see soldiers ID cards flashed everywhere.


ALSO.. LOOK at what you are sent.. REALLY LOOK... some can be really funny.

Email ThisBlogThis!Share to TwitterShare to FacebookShare to Pinterest
Labels: video