HOW IS IT SCAMS ARE STILL HAPPENING ?? HOW IS IT NOTHING IS BEING LEARNED ??
HOW ARE THE WRONG PEOPLE BEING BLAMED. OVER AND OVER....
Words received by us today. 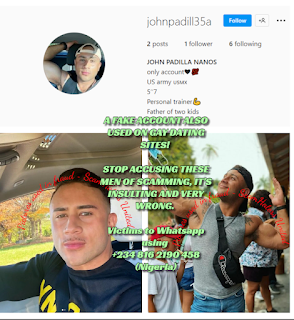 I'm been scammed by JOHN PADILLA NANOS
We met on a dating app called gayfriendly, we were talking and he was on a peackeeping misson but wanted me to borrow him money which now i know its a lie, he keeps promising me money and everything but i have yet to see him, he says that he is currenlty at louis armstrong airport, his number is +234 816 2190 458 thats his whatsapp number.
This man is playing with my heart i refuse to let him in again. He is active on facebook messenger.
Usuing john padilla nickname "nanos" he is the real john but he scheming people out they money thinking that its nigerian scammers but its him. 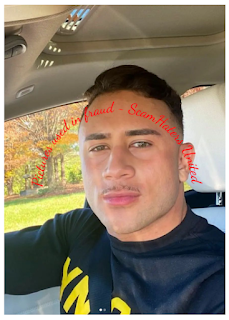 Both said they had a ex named ishmeal. They were texting me at the same time. This man has several different names too. I feel like him and his bf is scamming people out they money pretending to be other people.
He still with his boyfriend and pretending to be broken up so they can talk to other people. I gave this man 4,000 which i admit was stupid of me tbh. His whatsapp is still active at the moment.and his facebook john padilla nanos profile. He hiding himself in plain sight.
~~~~~~~~~~~~~~~~
PADILLA IS NOT EVEN GAY. ! But used like many as gay and straight and blamed ...
🚩WHY DOES NOBODY CHALLENGING the 'Peacekeeping' word.. YOU CAN'T KEEP PEACE IN A WAR. and yet the word PEACEKEEPING IS THROWN AROUND IN ALMOST EVERY MILITARY SCAM
🚩+234 IS Nigeria!
🚩 It seems this person knows it is all a lie BUT CHOOSES TO STAY IN THE SCAM
🚩 Happy for the scammer to promise him money though!
🚩IN SUCH PLAIN SIGHT ! It is not him ! NIGERIAN PHONE NUMBER AND STILL THE SCAMMERS GET AWAY WITH IT ALL...
SUCH NONSENSE HAS TO STOP. Stop sending money to people you have never met but it makes it so wrong when the wrong people are blamed.
SCAMMING = THE PERSFECT CRIME... use stolen pictures, tell lies, get money... RUN OFF AND SPEND IT WHILE THE INNOCENT ARE BLAMED.
FACEBOOK POST 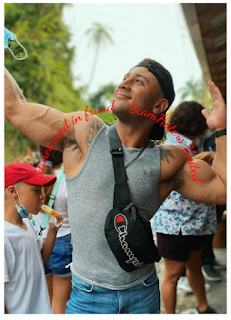 Email ThisBlogThis!Share to TwitterShare to FacebookShare to Pinterest
Labels: PADILLA