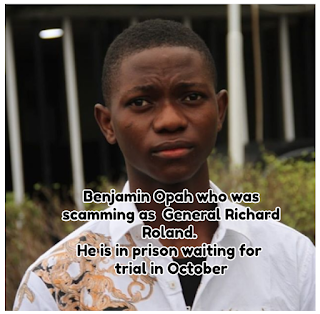 Benjamin Opah who was scamming as General Richard Roland.
He is in prison waiting for
trial in October 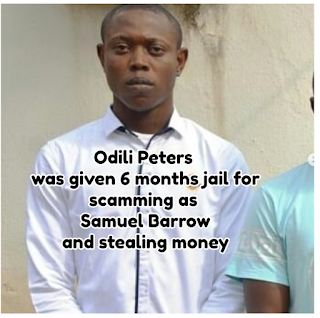 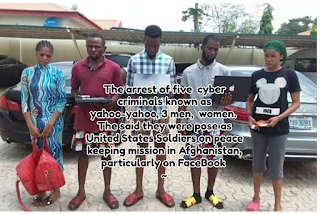 The arrest of five cyber criminals known as yahoo-yahoo, 3 men, women.
The said they were pose as United States Soldiers on peace keeping mission in Afghanistan, particularly on FaceBook
~
They stated that they operate by creating fake FaceBook pages using display pictures and names belonging to mostly foreigners in order to deceive unsuspecting victims mostly females of white nationality. .
~
Another mode of operation to is link up with their other conspirators known as Pickers residing in US and Ghana to help in receiving their loot via their dollar accounts domiciled in the US for onwards transfer to their boss in Nigeria after they must have duped their victims. They added that usually, they give 30% of their loot to these pickers while the remaining 70% is shared among the remaining members.
.
.
The fraudsters parade themselves with names like James Scott, Ibro wire (Ibrahim Idris AKA Ibro), Lious James, carista Sadiq (Sadiq Idris), Griffen James, CBN Martins (Martins Abeku), others arrested are Blessing Nicolas (Phil Nicholas), Esther Micheal (Xta Mikelz).
.
.
Items recovered include a yellow ELEPAC generator, 2 HP and 1 Del laptop, 2 Huawei Network wifi, phones, wrist watch, sim cards and ATM cards.
.
.
They shall be prosecuted as soon as investigation is concluded.
. 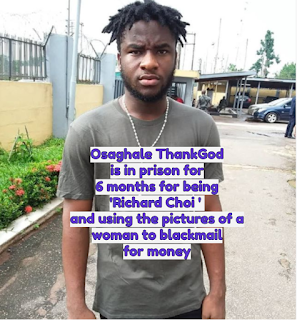 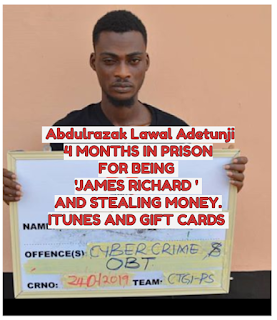 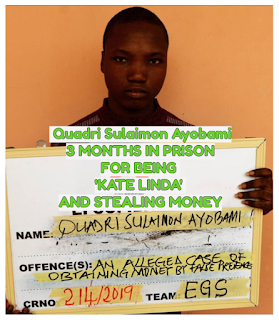 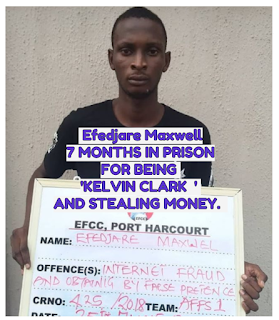 Efedjare Maxwell
7 MONTHS IN PRISON
FOR BEING
'KELVIN CLARK '
AND STEALING MONEY.