Bryan Scott Nicholas... DEPLOYED TO LAGOS, NIGERIAN !! Really.. why would they be? 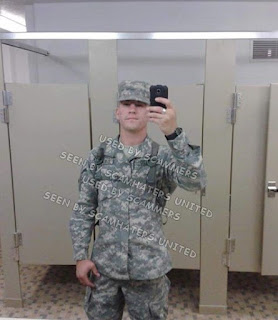 WHAT HAPPENS WHEN YOU CAN'T FIND THE PICTURES OF THE SOLDIER YOU ARE TALKING TO ONLINE??
Well.. maybe they have not been used before, or not reported and recorded before... BUT THAT DOES NOT MEAN THEY ARE REAL.
Look at what they are saying !
THIS ONE IS SAYING HE IS IN THE US ARMY AND DEPLOYED.. BUT WHERE??
🚩LAGOS.. NIGERIA.
Now why would the US Army be in Lagos?? A large city in Nigeria where life if lived as normal.
Yes Nigeria, have a terrorism problem with Boko Haram but their soldiers fight that and WHY WOULD THE US ARMY??? They have no reason to be there. ~~

THIS IS ON THE ARMY WEBSITE..
''Victims may encounter these romance scammers on a legitimate dating website or social media platform, but they are not U.S. Soldiers. To perpetrate this scam, the scammers take on the online persona of a current or former U.S. Soldier, and then, using photographs of a Soldier from the internet, build a false identity to begin prowling the web for victims.
Never send money to someone claiming to be a Soldier!
The most common scheme involves criminals, often from other countries -- most notably from West African countries -- pretending to be U.S. Soldiers serving in a combat zone or other overseas location. ''
~~~~~~~~~~~~~~~~~~~~~~~~~~~~~~~
WEST AFRICAN COUNTRIES BECAUSE THIS IS WHERE THE SCAMMERS LIVE.
~
THIS IS NOT A SOLDIER IN WEST AFRICA..
THIS IS A SCAMMER IN WEST AFRICA PRETENDING TO BE A SOLDIER TO STEAL MONEY 🇳🇬🇳🇬
~
💔 NEVER ACCEPT A FRIEND/FOLLOW REQUEST FROM A STRANGER.
👎NEVER EVER SEND *ANYTHING* TO ANYONE YOU HAVE NEVER MET IN PERSON. IT IS ALWAYS A SCAM
👿YOU ARE NOT SPEAKING TO THE PERSON HERE.JUST TO A CRIMINAL ON A LAPTOP
👍ALWAYS GOOGLE IMAGES. Or you can use TINEYE. There are other free apps you can get for mobiles..TRY REVERSEE! if on computer use YANDEX.
https://www.facebook.com/SHUisteamwork/posts/808701396167466..
at June 01, 2019