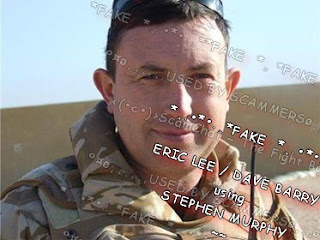 FAKE
USING THE STOLEN PICTURES OF STEPHEN MURPHY. (Some of the pictures Facebook won't let me post... dare we hope they are using some recognition of pictures to stop them being here)
~~ 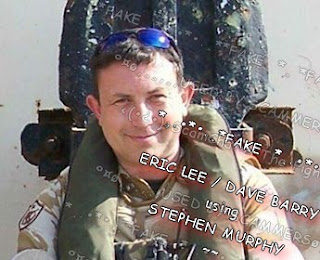 WHEN YOU THINK HE IS A SOLDIER HE WILL SPEND 3 TO 4 HOURS A NIGHT TEXTING ...think about it.. NO SOLDIER HAS THIS AMOUNT OF TIME TO SPEND TEXTING. HE IS DEPLOYED.. HE IS DOING A JOB. 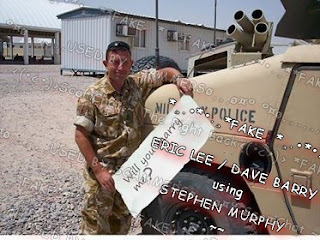 One of the money receivers is : WESTERN UNION
Stacey McFadden United States city Kokomo 46901
(The lie here is that she is the Dr caring for his sick son)
~~
MONEY ALSO TO
Daniel Roland state Abuja Country Nigeria
~~
HE SENDS MANY POINTLESS PICTURES OF HOUSES AND EVEN A STOLEN VIDEO OF A CHILD. (This will be from someone's profile that has accepted him in the past). WITH THE USUAL 'Will you marry me' PHOTOSHOPPED ONE.
~~
THEN WE GET TO HIM SENDING HIS LUGGAGE... fake security company is
Los Angeles 12405732229

He loves talking about what you had for breakfast and dinner. He would always say take some fruit juice. And when you ask him what he had it would always be coffee or water.and when you ask him what he had for dinner he would say his favourite chicken rice.
*
Talking about how he followed in his father's footsteps by doing the same line of work as his father did.that his father was a great solider.and he wanted to be like him.


SS1 August 2017 at 04:56
Unfortunately I have encountered him and he stole $7,300 from me under the name of special agent Sergeant Donald Morphy stationed in Syria.

I am so sorry they found you. I wish we could tell everyone to always check everything... it's sad we have to teach people never to trust.. but that is just what we have to do now. Stephen is one of the most common faces used in scams, he has never been in the US Army. The Army are not allowed on social media to contact people they do not know.they aren't allowed to say where they are to a stranger . and they need money for nothing. Scamming has to stop.
at July 02, 2017