This is a story of a female who is a serial scam victim. This is NOT her first fling with a fake. This is probably the same scammers with a different name.. as they got plenty out of her last time.
https://www.facebook.com/umar.yayahgududzuru
Umar Yayah Gududzuru THIS IS ANOTHER ACCOUNT WHICH IS CONNECTED WITH THE DICKINSON ACCOUNT.
Ok let's get back to our Scam.
THE SCAMMER ASKED FOR.. AND GOT over $17,000 from the victim. As I say, this is not her first scam. She lost a lot more previously (but still within the year).

TALKS VICTIMS INTO TURNING THEIR BACKS ON THE FAMILY AND DOING EVERYTHING FOR 'him'....

Her scammer (sorry her Lover! ) still wanted another $11000 !
What has she left to sell..... SHE WAS A MARRIED WOMAN.
Preparing to leave her husband for her latest scammer

THE PERSON SHE HAD NEVER VIDEO CALLED OR HAD ANY REAL CONTACT WITH.
So what more could she sell???
Of course.... 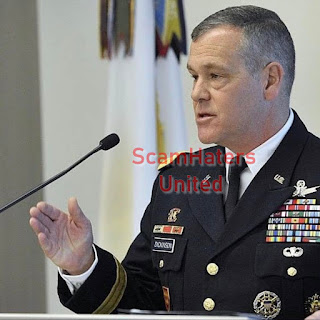 THIS WOMAN SOLD THE RIGHTS TO HER CHILDREN FOR $11,000 ... .signed legal paper work in a lawyers office signing over her physical custody of her children for $11,000 .

LET ME REPEAT THAT SO IT SINKS IN TO YOU ALL READING THIS. ..signed legal paper work in lawyers office signing over her physical custody of her children for $11,000 . BECAUSE HER ONLINE LOVER WANTED ANOTHER $11000.
This is as low as it can go really. How can you put a price on your children so you get the cash your African cyber criminal needs? (OOPS, I mean your highly decorated General wants)... YOU SELL THE RIGHTS TO YOUR CHILDREN.
Something that family and those children have to live with the rest of their lives.
Let us see what it says about James Dickinson, because they are easy to find online.

James H. Dickinson is a United States Army general currently serving as the commander of the United States Space Command, previously serving as its deputy commander until assuming his current position in August 2020. James Dickinson is married to Angie. (still living and not divorced or anything STILL LIVING AS A COUPLE)
SPACE COMMAND.. no war zones here, unless the moon is a war zone. SPACE COMMAND.
The scammer won't care. He has got his money. They have no consideration for anyone. As long as the cash is forthcoming the method isn't important. The victim isn't important.
A legacy has been left now... a family torn apart because SCAMMERS WANTED MORE MONEY, and they got it. Ruining lives forever.
SCAMMING IS NOT A NEW PHENOMENON . Catfish on MTV started in 2012. I know many are aware of the 'catfish' or 'SCAMMING' across most social media. YET IT STILL HAPPENS WITH HORRIBLE REGULARITY EVERY DAY.
Right now there will be hundreds of thousands of women and men across the world in the middle of a SCAM, a fake realtionship.
𝓦𝓱𝓮𝓷 𝓽𝓱𝓮 𝓶𝓸𝓷𝓮𝔂 𝓼𝓽𝓸𝓹𝓼, 𝓽𝓱𝓮 𝓢𝓒𝓐𝓜𝓢 𝓼𝓽𝓸𝓹
Facebook Post 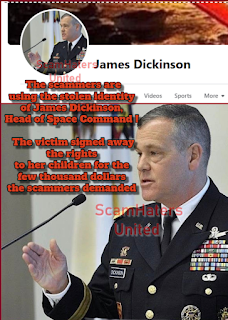