In a Victims Own words.. JOHN O'SHAUGHNESSY

I encountered my first scammer, John, when he commented on one of my Facebook posts, saying something like, "I don't want to send you a friend request because you don't know me, and it would be rude. So can you send me one."

So, I figured he must have liked my post, and I thought he sounded very polite, so I sent the request and of course, he accepted.
He said he was an Air Force general, Terrence J. O'Shaughnessy. (I was impressed.) He went by his middle name, John.
In our first conversation he asked me if I was married, and I hadn't been. He said he had been married and his wife was a "witch". I thought that was pretty awful for an officer to talk that way about his ex.
He said he was in Syria on a "classified" mission commanding a battalion of soldiers. He said he liked to get the news of home from someone who was there. I looked at his FB profile, but didn't remember much of it. He wasn't especially good-looking, just a regular guy.
I saved the two pictures of him. I compulsively save lots of photos from the internet, so that was usual for me. We chatted on FB Messenger for a couple of days but he kept pushing me to go to Google Hangouts.
He deleted his Facebook account, and started emailing me. This was all happening on FB Messaging. I finally got on Hangouts after 2 or 3 days. I was kind of busy and Syria is 7 hours earlier than me. Due to this timing and my schedule, we rarely chatted, but mostly exchanged posts back and forth. I wanted to check him out, so I went to Wikipedia, and he was there, so he did exist.
The photo in Wikipedia was more flattering, and he was very good-looking. I saved it. He was ten years younger than me, not a bad range. I found out he grew up about 40 miles from where I grew up in Town X.
He often sent me posts in the morning with stuff like, Get up and welcome the day... blah, blah , blah. I noticed things that didn't seem right. His grammar and spelling were awful, and seemed unlikely for a General, but I rationalized, maybe he has a good secretary.
He often said, "okay" at the end of a post, and would always say "stay safe". At times, it seemed like different people were writing the posts because of the different ability levels in writing in English. I mentioned in a post that I had grown up in Town X, and he was not the slightest bit interested. He didn't say, oh I lived near there, which is what I expected. I think he was chatting with someone else at the time, because his responses @ it were hasty and kind of irrelevant. 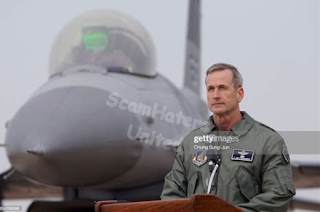 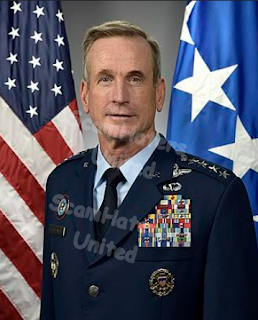 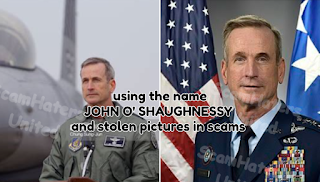