Be careful . African scammers using 'COMMON' in scams. Pretend to be him and steal money. Fake Charity and Fake Package

A LETTER FROM A VICTIM 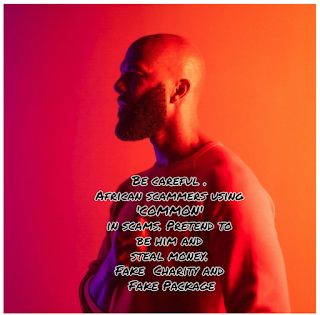 ~~I was communicating with someone from your group on FB messenger and was given this email address. So here is my Story.First I must commend you guys for the awesome and tireless job you are doing on educating us about Scammers. I want to share my story with you so that others may be alerted.

I too was scammed by someone pretending to be the Rapper, Actor, Activist Common.

To be honest with you I felt so embarrassed and ashamed for allowing this to happen to me. I must say after it had happened I have been in conversations with three other ladies who have been scammed too by this Common Scammer including a lady in Switzerland.

I honestly have heard about scamming but never paid attention to it. My experience goes like this. I admire this Rapper a lot for all he does as a result I always commented on his social media posts.

After doing so someone messaged me in another account in his name claiming to be him thanking me for being a fan. I exchanged conversation with him for a few days and then he invited me to hangout while conversating there he asked for iTunes cards once he asked I realized it was a scam and reported the account and blocked him.

I then went to Common’s page and posted that someone was asking for iTunes card. Someone again responded in box saying it’s him and that I should be careful of those posts and that he reported the accounts.

This one now told me he has charities for underprivileged kids in Cuba, Venezuela and Nigeria and was asking me to support his charity in Nigeria by sending money to Enajero Goodluck at 2 0 4 Nitel Street Benin City Nigeria.

Right away I realized it’s a scam report and block him. I again went back on Common’s real page and wrote that they are using his name to scam. I specifically went on his page immediately after he posted and tagged him.

For weeks I had noticed the common1345🔵 (which I reported to you and you got Instagram to remove) on his page responding to fans comments he would come on immediately after the real common make a posts and he even responded to comments that the real commons name was tagged in so when he messaged me in box saying he saw my comment about the scamming and that he was in contact with the outlets to remove them I really thought it was the real Common.

We engaged in conversation from about late September of 2018 to late November 2018 mainly casual talks with him saying he is ready to settle down etc and he was always encouraging me to go to church and pray etc. He would always engage in conversation with me immediately after Common makes a posts and he claimed that the Common1345🔵 is just his private account.

I also was quite sure I had noticed that this account was been followed by the real Davidofficial account at the time I really didn’t know who that was but that was a verified account following him so it kind of convinced me that it was the real Common.

It was after I realized I was been scammed I started to look through his follow and followers lists to see if I could get some information by then the Davidofficial account wasn’t following him anymore and I also found out David official is a popular Nigerian Celebrity. It was in November that he invited me to hangouts and stupid me went there he claimed while he was talking to me his daughter was asking him who he was talking to and that he wanted me to establish a relationship with her because he is in love with me and the rest of jibberish they tell women.

Now daughter started to talk with me on hangouts she even called me and talked to me about three times. What I did noticed was that the daughter seemed to have an English accent which I asked her about and she said she loved the accent and is always practicing.

So after been on hangouts with him for a week he asked me if I could grant him a favor. Claimed that his father had left inheritance and that it was in France for protection and needed the money to be sent to me because he didn’t want his manager to know about it.

Stupid me sent him my address and drivers license so that custom agent could send it to me he even sent me the custom agents name and passport smh Ora Antoinette Wagner she supposedly is a white lady.

After that he said that he needs money to clear the package with customs. And that’s when I ended up sending a total of around $3500 including Western Union fees at different times because each time the money sent wasn’t enough and package was never delivered.

By the time I sent $1000 I knew it was a scam but was very scared because they had my address. Eventually I stopped told him I knew he was scamming me. Reported his hangout account and Instagram account. Instagram never removed the account.

Thanks to you for having them done so..2 years after. I also blocked him. I didn’t care if I lost my life in this process.

Another woman that was scammed told me of an FB page that they claimed was created by Common to report the scammed pages. The is is Actor Rapper Common Social Page I messaged them and gave them the info of fake pages and they responded to say they are working with the platforms to remove them. I even went on his FB post and called out the Common1345🔵 page for scamming and about two days after I woke up to find two bricks in my car rear windshield good thing I had complete coverage on my car. I figured that was a warning.

I reported to the authorities but didn’t mention that I thought it may be related. I had reported that I was scammed prior and they didn’t take it serious but advised me to freeze my credit which I did.I also reported to Western Union. I think these people are dangerous and they are operating in California, Texas, New York, Chicago and Atlanta. I sent my money to Texas and the lady in Switzerland sent hers to Texas too.

Someone else I spoke to but who is afraid to come forward did a big cash transfer from California-Georgia-New York. I have sent several messages to his DM and several women have since came out and wrote on his posts and they never respond. After been scammed I started to study his page. I eventually went to two of his concerts with the hope to say something to him personally but didn’t get the chance to, I met him just for a photo but everything was just rushed.

While studying his page I came up with this person Aigbomian Samson who had a Twitter account in this his real name but then changed it to Common Lynn. I found this out because I scrolled his tweets and replies and saw where a woman tagged him in his real name when I clicked on the tag it lead me right back to Common Lynn. There is also someone on Instagram now as self_same this person seems to operate in Dubai but he is also following most of the people on Common’s team.

Hence them knowing this man’s whereabouts and know what to say to the ladies because a lot of ladies are in love with this man. When I put commons name in Instagram search I found like 80 different pages some public and some private they all uses his images and some uses the links on his page too. I’m sure they are doing it with other celebs too.

They are also offering to pay bills in Common’s name because they know he’s a generous person. Thank you for your platform. Had I known about you before, this wouldn’t have happened to me. I have not shared this with my family because I am too embarrassed. Thank you again and you guys are a Blessing to us Ladies. It pays to learn!

PS: Communication lasted from late September to lake November In November he said his daughter fainted at the airport while she was coming to NY to meet him to visit me.

Claiming daughter has stomach cancer and responding to me from his daughters hangout page when he is supposed to be in NY and she in Chicago. I blocked him reported to hangouts as well as Instagram. He started begging in November after he invited me to hangouts. I searched to find who Common’s people were and sent them direct messages I also found his daughters Instagram page and sent her a message too. No one ever responded and after going through his posts I saw that other women were commenting about been scammed too. I reached out to two of them. Two of them posted on his Twitter page the fake passport and drivers license they had in his name.

I saw my efforts to contact him was useless so instead when ever I see the pages send me follow requests I simply block them and would notify fans they are scammers if I see them responding to them on his posts. 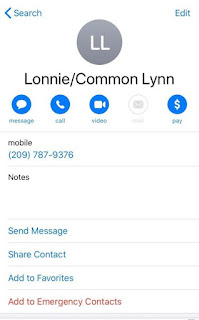 Email ThisBlogThis!Share to TwitterShare to FacebookShare to Pinterest
Labels: common