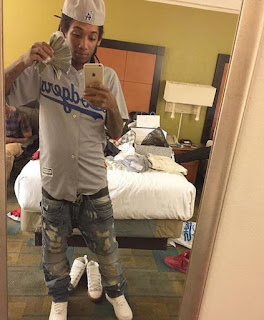 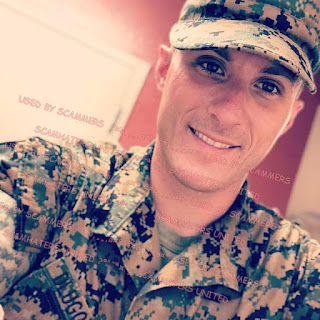 So.. you in love with a handsome soldier?? THINK AGAIN !
The internet is flooded with them... GOOD LOOKING SOLDIERS !
They may have contacted you with a ‘Hello beautiful’..’Hello Pretty’... ‘was just browsing and decided to send you are request, am so taken by your beauty’... YEAH RIGHT !! When was the last time you did that to anyone?? Or any man you know randomly contacted a woman because he liked the look of her?? I THINK NEVER ! Only fakes do it.
SO.. your soldier.. CAN IT BE THAT MOST OF THE U.S. (and increasingly the U.K. ) MILITARY ARE WIDOWED?? Lost their wives in a car crash, cancer or child birth?? (Childbirth death is still common in Africa, not here).
IF NOT, A SMALL NUMBER ARE DIVORCED ! Caught their wives cheating with their best friend, or being a drug addict or some other sad story. NOW THIS CAN’T BE ALL OF THEM !
Have you seen how many come from TEXAS ?? (Scammers favourite state),closely followed by California. (They love California City.. but it does not exist ! ).
MANY SAY THEY ARE PEACEKEEPING.. now a word about this. Peacekeeping is something that is in a place where there is PEACE.. Here is a list of current Peacekeeping Missions.
https://peacekeeping.un.org/en/where-we-operate and Peacekeepers wear light blue caps, berets and helmets. Ask for a picture with your ‘soldier’ wearing his Peacekeepers headgear. I mean, if he is real, then that is not hard?? Or is it? THERE IS NO PEACEKEEPING IN IRAQ, SYRIA OR AFGHANISTAN.. THERE IS NO PEACE.
THE ARMY IN NIGERIA....The Nigerian Army fight Boko Haram and their terrorists. ISIS ARE A THREAT TO THE WORLD, Boko Haram are a threat to AFRICA and Africa looks after this. THE U.S. AND U.K. ARMY ARE NOT DEPLOYED TO NIGERIA OR WEST AFRICAN COUNTRIES AND DO NOT HAVE ‘CAMPS’ AND ‘BASES’ THERE. No matter what your lover tells you. HE IS THE SCAMMER IN NIGERIA SO THAT YOU WILL SEND THE MONEY THERE TO HIM.... Oh !! and ...if they are in a Middle East war zone.. THEY WILL NEVER HAVE AN ‘AGENT’ IN NIGERIA WHO COLLECTS THE MONEY FOR THEM AND SENDS IT. .............Stop and Think. ! ALWAYS CHECK !
The military needs money for NOTHING. No medical bills, for him or his family.No needing money for a sick child anywhere in the world (and nobody leaves his child in school in Africa). HE DOES NOT NEED MONEY FOR FOOD.. have you seen how the Army eats ! They are not given local food made around a campfire ! THEY EAT WELL. THEY DO NOT LOSE GUNS AND HAVE TO PAY FOR THEM ! (That one is ridiculous ! ). They do not need money for WIFI.. for DATA.. or internet access of any kind.
THERE IS NO SUCH THING AS A FIANCEE FORM AND NOBODY APPLIES FOR LEAVE FOR A SOLDIER OR ANYONE WHO SAYS WORKING WITH THE U.N. They are deployed as a unit, they go and return as a unit and the Army transports them.
IF HE IS ONLINE EVERY DAY TO TEXT... HE IS FAKE.. A soldier does not have time for that.. some report spending 5 + hours a day online to their lover.. AGAIN STOP AND THINK.
ALWAYS ASK FOR HIS @MAIL.MIL EMAIL ADDRESS.... AND I MEAN ALWAYS. The Army doesn’t use gmail or yahoo mail... they use @mail.mil. NOW.. your lover will give you a million reasons why he can’t give that. If he gives one then email it... and wait for the reply. (It will never come, but wait to check it, !) EVEN THE ARMY SAYS... IF HE REFUSES TO GIVE THIS HE IS FAKE.. believe the Army and NOT your lover.
REAL SOLDIERS DON’T RANDOMLY SEND OUT REQUESTS TO WOMEN. ON Facebook, Instagram.. Words with Friends... ANYWHERE... they just do not do it. IF YOU HAVE A FRIEND OR FOLLOW OR CHAT REQUEST FROM ANYONE SAYING MILITARY...
THEY ARE FAKE...
LEARN TO SAY NO.... IT’S EASY AND KEEPS YOU SAFE

22 December 2018 at 16:53
So I've been talking to Mitchell Murphy and decided to do an image search to find out it's a scammer the other names I saw associated with the image are Jake Murphy, Santos Murphy, Jake Peterson Murphy and many more. I'm so glad I'm smart enough to not send any money. Just want to inform everyone their using his profile again and I met him on Pof. I'm pretty sure they are using another name now.


10 November 2018 at 03:01
His name was Michael Hilton. He claims to be part of the UN Peacekeeping mission based in NIGERIA. He is a divorced father of a 4 year old daughter. He said he was in the US Air Force as a first sergeant. his photo tipped me off because his rank was either a staff sergeant or a technical sergeant. He said he was scheduled there for the next 7 months and his daughter was with a nanny. All very suspicious to me. Good thing I looked on here!
~~

1 November 2019 at 04:01
I've had intensively communicate with a journalist deployed in Afghanistan, his name is Emmanuel Jones as a chief Journalist. We're just make communication about 1 month but he asked for me to get married.. lol.. He's so lovely and I was so impressed with all of his word texted. He said from US but I dont believe when someday we got called by whatsapp, his voice definitely Nigerian or not any others white guys looks. He asked for me to filled in the form to apply his permission leave from his base camp and will marrying me during his duration vacation. Thank God, when UN fake account (@un-hr.org) asked for me to send my ID Card, I realized that I am on target scammers. His UN ID card take me to the your site.. thank you .. because his ID card looks like fake ID card, so I searched for and damn it's definitely FAKE.!! LOL..

I just blocked all of them mail and whatsapp sent to me.
anyway his mail is emjones0099@gmail.com