THERE IS A LOT ON HERE AND IT'S ALL OFFICIAL FROM MILITARY ADVICE PAGES.

SO PAUSE THE VIDEO AND READ... AND BELIEVE..

LISTEN TO THE ARMY AND NOT THE MILITARY MAN OR WOMAN YOU HAVE NEVER MET...

I AM SORRY IT IS ALL IN ENGLISH. THERE IS A LOT OF INFORMATION OUT THERE.

IT'S JUST DOES ANYONE WANT TO CHECK AND FIND IT !!!!

NEVER ACCEPT ANYTHING WITHOUT CHECKING IT.

YOU GOOGLE A SPOT AND A SNEEZE... NEVER NEVER
GOOGLE WHO YOU ARE 'GOING TO MARRY' AND SENDING A LOT OF MONEY TO !!!! 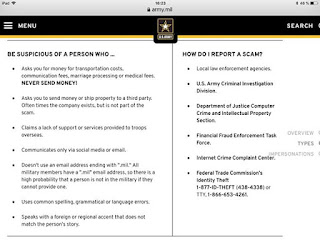 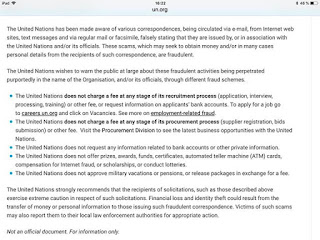 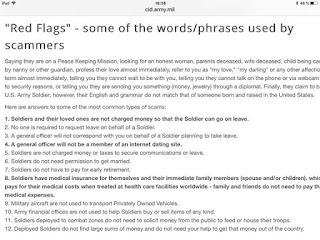 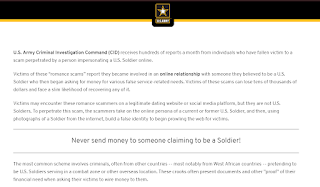 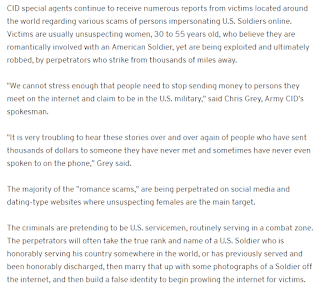 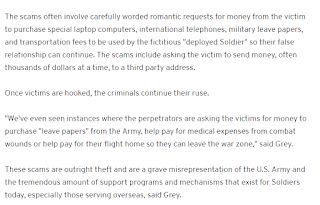 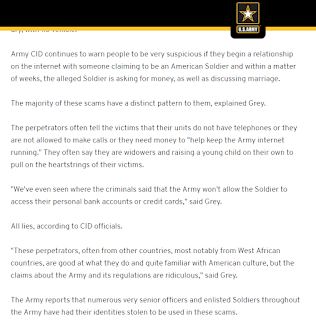 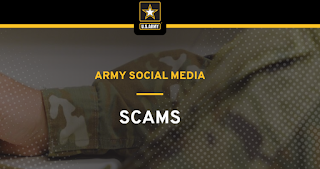 My mother in law was in contact with a person I found suspicious and he is using none other than "James Onderdonk"'s photographs. These photographs belong to Sgt. William Bill Onderdonk, a retired U.S. Army administrator. I have included a text document of my findings of 165 accounts using his photographs, all scam accounts. It is posted here for anyone who would like to check if the account being used is fake.

Hello. I was also a fish for the scammer. Sergeant Richard Mario who was on a peacekeeping mission in Afghanistan and later found himself in Yemen. 9 months of play and minus $ 5,000. we met on LinkedIn, later switched to WhatsApp and Hangout. I was in the process of divorce so his honey words clouded my head. his wife left him with a child who cared for by a nanny. the girl is has got a death sickness. that's why we need money for treatment and termination of the contract and money for a ticket go home. I was a fool in love who believed his words. a very subtle psychologist and a skilled adventurer. He sent his photos. of course they stolen. mail richardmario282@gmail.com and his number.+1(678)813-7055. my story is long but sad
21 July 2021 at 07:31

Hello,someone know this person Bristow Anita? I think this person is a scammer,i want to report this person.
Chatting for a few days,says she's in Afghanistan,military serving...and now she ask me to send some money for her kid in USA ....i have screenshots and his mobile nr from whatapp:+1 614-547-3932....thanks

Good morning, this man is dedicated to scamming, he calls himself Michael Cruze 48 years old, he says he was born in Germany and lives in Texas, American soldier with email militaryb2018@gmail.com He
has a fake Facebook and Google Hangout profile with the name Military Base. With me he wanted to prove but I told him that he was a scammer and a thief, I
analyzed his photos and they are false ,,,,

9 May 2019 at 18:48
have you heard about Stevens Hannemann , he's using stolen pictures from real Rob Stevens with the gmail account hannemannstevens1112@gmail.com
Someone goes by the name Alexander Andrew OR Andrew Alexander. He was on insta gram impersonating Dion Hinchcliffe. I reported him and now his account is closed.He is on hangouts as Andrew Alexander. Said he is a Physician in Iraq war zone. He works for UN. He asked for 10k to 27K so he can come back to USA. He said he sent his personal belongings via diplomatic global shipping companyThe bank wire department caught it as Romance scam. He is on gmail as alexanderandrew778@gmail.com. I have blocked him. Apparently his wife died and has twins taken care of by a Nanny.Smooth talker and he wants money. He has British words , poor grammar but I don't know anything else. He only texts and emails. No calls. He is a scammer.