WHEN A DAUGHTER HAS HER MOTHER INVOLVED WITH A SCAMMER.

WHEN A DAUGHTER HAS HER MOTHER INVOLVED WITH A SCAMMER.

➡️READ THIS RIGHT TO THE END.. THERE ARE LESSONS HERE FOR EVERYONE...

My mom meets this man online through one of her friend which is Mr. Morris Clinton. Morris and my mom became friends for almost 7 months in Facebook.

Just this January Morris introduced my mom to his friend named Williams Allen who’s finding for a wife and he added my mom in Facebook. He introduced himself as a US Military stationed in Afghanistan has one child and no wife.

My mom trusted them especially Morris since they’ve became friends and they exchange Godly words since the day they know each other. As you can see to Williams messages to my mom he’s thoughtful and loving even they didn’t see each other, Williams wanted my mom to marry him even they’ve just talked for few days.

He said his work is very dangerous and he wants to take a leave from his work and be with my mom and his daughter but according to him he can’t do that for himself only his daughter, parents or wife can file an emergency leave for him. He told my mom that he don’t have parents and his daughter was not able to do it, so he asked my mom to file an emergency leave for him he even instructed my mom what she’s going to write in the email and he gave the email address of their camp which is u.smilitarycamp90@yahoo.com.

My mom wrote to the email address he gave and files an emergency leave for him and after 2 hours my mom received a reply saying that they will confirm the claims to Williams by an email coming from him and they will interview him. After 2 days she received another email from them saying they are still working on the leave request and the delay is due to several departments who needs to pass for its approval.

Last January 30, they just send an email containing an attachment which states the option for leave, it has three options and every option has corresponding charges, also the letter shows the due date for payment. My mom forward the letter to Williams’ email address at williamswilliams603@yahoo.com then they talked about it, Williams wanted the 3rd option which has the highest charge so my mom replied to the camp that she choose the 3rd one, then they talked how they will settle the charges. The camp send info on how she can settle it and it is through western union or money gram within 7 days to process the documents for the leave.

My mom are excited at first because she thought Williams will send money to her to settle the charges but Williams told my mom that he can’t do it since he’s not able to do it because he never had access to his account, so my mom told him to borrow money to Mr. Morris for the charges and he agreed but he said my mom needs to settle at least 30% of it for the documents to process. During that moment they are having a hard time to talk to Morris because according to him he’s on a meeting or having a project something like that so my mom finds a way to pay at least 30% of it but she doesn’t have money so he told it to Williams, he became disappointed and he even get mad.

My mom didn’t give up she borrows money to pay it but still not enough to complete the 30% needed for the first payment and in that moment they are already connected to Morris and he agreed to pay the remaining balance which costs $1250.

He said that he will just send it to my mom on Tuesday morning US time (Feb 6, 2018) to complete the payment after his meeting. But they changed the plan because the camp emailed my mom and they informed her that she only have 24 hours to settle the charges or else the leave will be terminated, when mom received that email she immediately went to Western Union to pay it even the money is not enough.

During that time Williams is very upset because according to him my mom is not willing to pay the charges even he said he will pay it when the camp approved his leave and when he went to our country. That moment I already talked to my mom to not pay the charges because I figured out and searched that they are scammers but in the end she still pay for it.

My mom lied to me because when I asked her if she paid the charges for leave she said no even she already did it. I just found out when I open his email because the camp emailed her that the money she sent to them were not able to claim, then I talked to my mom to get it back from Western Union and she found out that the person named in the remittance was blacklisted so the remittance center didn’t released it. Yes, we are able to get back the money.
I share it to help others to don’t trust anyone you just met in social media.
~~~~~~~~~~~~~~~~~~~~~~~~~~~~~~~

❗ALWAYS CHECK IF THE MONEY HAS BEEN COLLECTED.. IF IT HAS NOT.. YOU CAN GET IT BACK 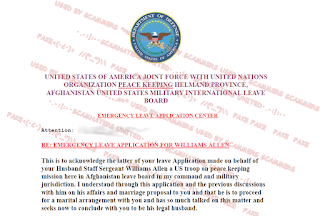 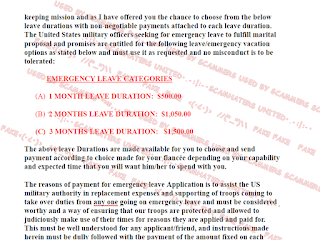