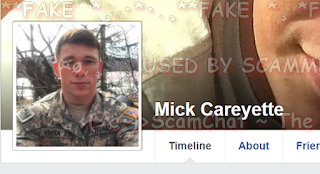 FAKE
~~
https://www.facebook.com/mick.careyette
~~
ALSO SCAMMING AS CARAYETTE WILLIAMS AND MANY OTHER NAMES ON ALL SOCIAL MEDIA. If you are talking to this man.. you are being scammed. 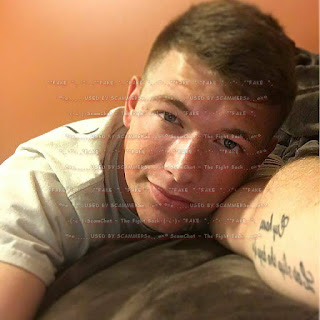 LOOK AT IT... A BLANK FACEBOOK PAGE.... 3 pictures. No family, friends or anything personal. No comments ... no chat. Just adoring women???? 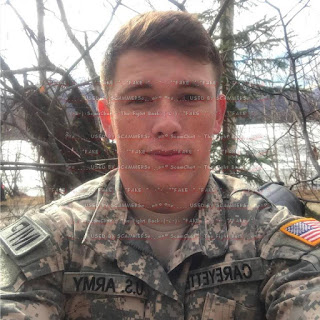 CAN NOBODY SEE THIS IS WRONG AND JUST SO NOT LIKE A REAL PROFILE. Look at your page and your friends.. then look at this one. 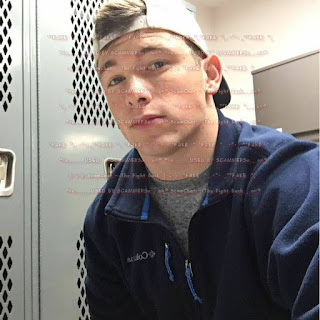 1 February 2019 at 19:19
I have just found him at Grindr, under the name of Careyette Dave. He said he was at Kabul Afeganisthan, but Grindr found him to be in the region of Congo. Said his ex had hacked his facebook and instagram account and had his bank account. When he started with this conversation immediately i blocked him. Hope no one else is cheated by this man.

YOU ARE NOT TALKING TO THE PERSON IN THE PICTURES.. These have been stolen and they are innocent of all of this. They are victims


He is now using the name Mike birthday October 2 phone 567-205-4569 Different location one parent from Spain now and both dead by the time he was 17 (which i would have google the name sooner) Met him on daddyhunt. Asked me to delete all social media accounts Asked from brand new Iphone since he lost his on call out Military claim but doesnt have any of the information he should have for military Gave me email address to gmail account (note goverment doesnt have offical gmail accounts) Wanted me to email his commander about getting him a new phone. When I stated I will contact USO then he worked for UN Stated just keep this between us Gifted romantic writer but sometimes english break down Google imagines with his name and the same ones he shared total fake Cant believe I gave him so of my information hoping for minumum damage pissed at myself for falling for his line of BS
When I told him contacted army CID still trying to make contact


"Billy Careyette" contacted me on Grindr yesterday and is using the following phone number out of NJ: 201-605-6220. He's continuing the Sgt. Careyette line, from NJ, parents worked for the USMA, went to the USMA, is on his second US Army tour in Afghanistan stationed in Kabul and is returning to the US in 15 weeks. He's looking for marriage.


He contacted me under the name John Yette and told me I was pretty and he was 30 never married and no kids and was a military police .he kept saying I was beautiful and could see himself settling down with me .and wanted to know how I make money and if I had a savings account. He wanted me to create a KIk account so we could talk note private and so he didn't lose his job for talking to me. Said he was on deployment but I then called him out on it. He said he was in California and wanted to know why I didn't believe him .after I sent him a screenshot of his scam alerts he refused to answer me. LoL. I was just getting to the pary where I told him I had a dhitty marriage and needed a military man to help me raise my kids LMFAO.


He is on Surge now as ‘Careyaette’ careyette11@gmail.com claims he is in Afghanistan and wants money for a flight home.

He’s on grindr under the name “Kelvin”. See email below
On Aug 30, 2018, at 4:33 AM, Kelvin Wilson wrote:
Hello Jon
To start I'm someone who accepts people as they are, I am a fair individual who adapts to changes in life and enjoys life to the fullest an easygoing guy that seeks an easygoing man in my life as well...
I want to meet a man that is tolerance level and how far he can go in life , If he is willing to stick around when the going gets tough and he will be there for me and I will be there for him too when the going gets tough on us. If he will still love me when I am falling apart....
I am from florida and lived alone in my own house there.Recently am out of state due to work.. am a physician specialist and right now I am with the UN in a peace Keeping Mission here in Afghanistan Kabul taking care of the injured Armies .And now have not less than a months few weeks to be back....
As for me i am single with no kids and have never been with a woman before.I can say I am a pure gay.....
Kelvin Wilson Careyette


30 June 2018 at 18:55
I think have told you already my full name is careyette snogles Martin I'm working with USA military grade 02 pay 1st sgt appt of machine engineer station in Egypt.....,.my Dad from Los Angeles and my mom is from Italian... I'm only child in my family....my Dad death at age of 77 years old and my mom death at age of 69 years old...... I live alone.....I have my own house and two cars.... I need a woman in my life now before I go back to state.. I like wrestling and going to beach.

The little money I came with from USA I sent it to one of fake lady from Japan..... I'm left with a little amount with me... Because I don't have access to my account inside base camp.

And I'm ready to resign from military work immediately after I get married so that I can have time for my family... Like my friend did.
The only way to apply for my vacation leave to visit you so that I will not be among the list to fight South Sudan terrorist group.
You can help me write my commander today so that he can start process it.. Because after we have the meeting they are going to select.

PhaseLord77318 June 2018 at 14:30
Found him on Grizzly account was deleted though, again asked to use hangouts new email address is careyette.roberts@gmail.com didn't get anything out of me thanks to this site.

Anonymous7 May 2018 at 02:07
Found this guy on Jack’d, goes by Sam Careyette.
He gave me his email address (careyettesam1@gmail.com) to add him on google hangouts; of course, he wouldn’t show anything at all on cam and only sent me a saved picture.
He did talk for a bit, so I can confirm this is a guy and not a girl scammer, with a very heavy accent and a broken English; then he asked me to buy him a $30 iTunes card.


He's on Grindr as David Careyette, and the email address he gave me was careyettedavid@gmail.com. Thanks for sharing this and helping me realize it's a scam.


Well, well... well. Seems he has moved on and has created a new nickname. After doing an reverse image search I found atleast 26 profiles throughout the world that he haws personal ads. He has asked me for financial assistance in shipping gold. Too good to be true, so, I didnt take it up on it. As far as reverse photo recognition, GOOGLE failed me miseraby with their service.I am thinking that if the user names, or a portion of name of Scammers were programmed into "meta tags" of scamming sites such as this then they would come up in search results of the major search engines. Webcrawlers read the meta tags and that is how searches are rendered. The more the website is updated, the more the webcrawlers read them the further up in the search they are. SO, I am creating a list of his known email addresses, his name and where his ads are, so, please feel free to post this info so I can include it. I posted this under anonymous as as I am still in contact with him and playing with him. I havent quite figured out how I can scam him, but atleast I can toy with him.

Unknown29 March 2018 at 05:19
He's on surge as Kelvin Harrison. Wish these apps would utilize websites like this to block these scammers with a reverse photo search upon uploading a photo. (Unless they can prove they're legit)


Men: He started talking to me on Grindr under the name Bobby Careyette. Started messaging me first, then started emailing. Looked up the name, only found the last name matching anywhere, but the pictures are probably the same person. Never sent him anything but an email. I didn't reveal too much about myself though.